Mexico: A Legacy Lives On

I've been trying to post more eloquently. I want my words to be more than just mish mash that I threw together. Because, let's be real, my pictures are not that much. It would be another story if I was an amazing photographer and the pictures could speak for themselves, but that is not the case. I want you guys to really understand why I [we] have such a heart for Mexico. Why these trips mean so much. So I'm going to try again. My frist trip to Mexico with Hands of Mercy was in the spring of 2004. I was a college freshman and really struggling with my identity and my walk with Christ. The college pastor of the church I was attending (often with a hangover) happened to be at my school one day at lunch and it just so happened that the group was going on a trip and would I want to come? It was what I wanted -- service and a way back deeper into the church. I ended up riding with a girl, Mel, who became a dear friend, accountability partner, and now my weekly crochet buddy. The trip did not change my life, persay, but it started a love for the organization and the people there. The college group went once or twice a year and I tried to join them as often as possible. It also started to get my walk with God back on track (but that's a whole nother story)!

When my husband and I met, we realized how much we both liked the trips. We often went together, and he somehow managed to tell one of the homeowner's that I was soon to be his fiance (how he managed this in Spanish and without my knowledge is beyond me). He proposed 3 days later. It seemed like we were down in Ensenada doing builds every other month  during the first couple of years of our marriage. We actually spent a month there in 2010, trying to decide if we were being called to full time missions there (we're not).

All that backstory to say, in 2007 my beloved Grandpa [Papa] passed away. We wanted to do something to remember him and to let his legacy live on. The decision was made to build two houses on the Ranch that groups could stay in (groups from the US stay in lofthouses on the Ranch property during the weekend that they build a lofthome for a family in Mexico). My parents were totally on board and we headed to the Bay area to do the prebuild in June of 2009. [This trip (in February 2010) shows the homes we built at the Ranch in my grandpa's honor.] My aunt thought her church would like it, and invited a friend over to watch. They were totally on board and their first trip was in November of 2009. They have built a home or two every year since. Matthew and I always try to join (I had to miss one trip), because the group is fantastic and I love seeing my grandfather's legacy live on. All that being said, we joined them for their fourth trip this November. I have some pictures from that trip, but also a few that I found from their archives of year's past. It's been fun to reminisce on trips past, and see who has trickles in to be a part of their group over the years. 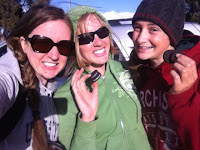 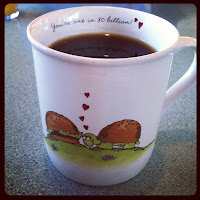 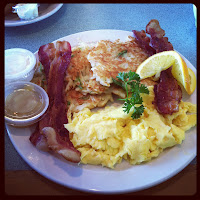 Breakfast at 8 am (after a 4 am departure) was AMAZING!
And now, the pictures from years past...

This year the girls put up all of the walls! I'm in a maroon shirt & blue hat. 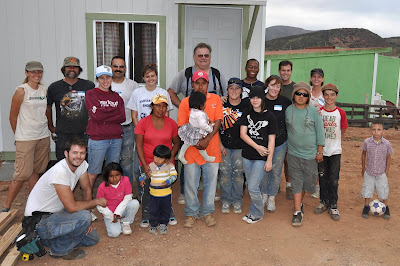 L: Holding up the Loft      R: Again in 2009. It was a late finish!
I hope that someday our children will have this legacy of our love for service and Mexico. What kind of legacy do you hope to leave?
Posted by Megan at 2:00 PM