The year is almost over.  It has been a fantastic year though, hasn't it??  This little ornament is adorable.  You can make either a cupcake or sushi roll.  I think the sushi would be the perfect Christmas gift topper for my sushi loving brother -- next year!!

August 30, 2013: I finished this quick little project in one evening. I decided to make both of the little guys. Personally, I think the cupcake is adorable, but the sushi is pretty cute too. I thought about giving it to my bro as a topper on his Christmas gift, but I really don't think he would care. Just being honest there! It also looks really flat. I should have made it taller! 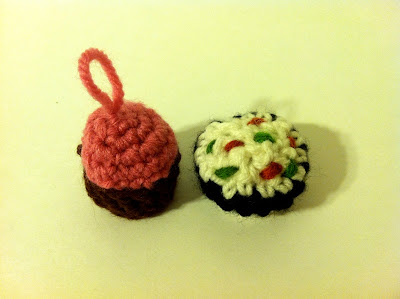